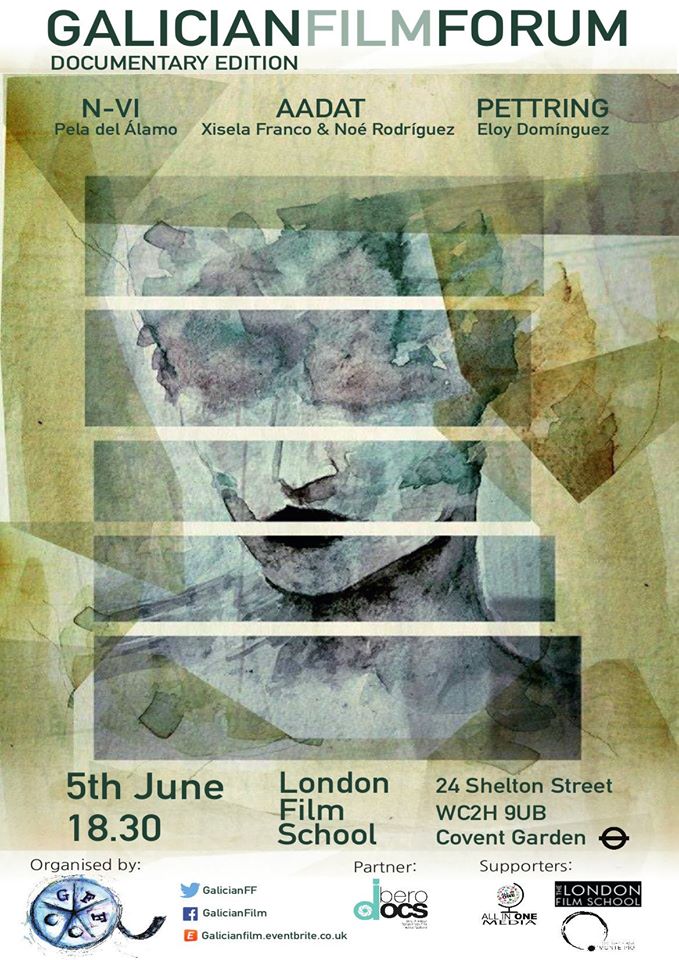 The Galician Film Forum’s next event is the result of their collaboration with Iberodocs, a film festival held in Scotland that is focused on Latin American documentaries.

The Galician Film Forum (GFF) will hold its second screening of Galician cinema in London on Friday 5th June in the prestigious London Film School (see map). The screening will start at half past six in the evening. The event will involve the screening of three documentaries, all directed by Galician filmmakers: N-VI, a full-length film by Pela del Álamo, AADAT, a short film directed by Xisela Franco and Noe Rodríguez, and Pettring, another short film by Eloy D. Serén. Once these films have been screened, the director, Pela del Álamo, will participate in a discussion, along with a figure from the British documentary industry who is still to be confirmed.

The GFF’s second edition is in collaboration with Iberodocs, a film festival focused on Latin American documentaries that was held in Edinburgh and Glasgow between the 14th and 24th May this year. The programme includes both Portuguese and Castilian productions as well as a selection of Galician films that appear in a section entitled ‘Focus on Galicia’. The documentaries that will be shown in the GFF’s second edition are taken from this selection and stand out against the other films.

The three documentaries that make up the programme for the second GFF were all filmed by Galician filmmakers working outside Galicia for reasons ranging from their own interest in other spaces to personal circumstances. N-VI follows the old highway that connected Galicia to Madrid to discover the lives of the people it left behind. Pettring is a diary filmed by Serén that follows his experience as an emigrant in Sweden. AADAT is a visual portrait of a refugee camp in the Sahara.

Some of these films fall into the cinematographic movement named Novo Cinema Galego (New Galician Cinema), a movement that is generating a lot of interest on an international scale thanks to the presence of Todos vós sodes capitáns, a film by Óliver Laxe, in the Festival de Cannes.

Álamo graduated from the Universitat Pompeu-Fabra with a BA degree in Audiovisual Communication and an MA in Creative Documentary. He has been working in publicity, television and fiction since 2001. In 2005, he created Diplodocus Producións with the aim of developing his personal projects in the world of documentary filmmaking. Two years later he started the long process of filming and producing N-VI, which would premiere in 2012. With this film, he won recognition in the Festival de Málaga, Márgenes, MiradasDoc and Alcances. He also participated in Seminci, Cinespaña, Lima Independiente and DocumentaMadrid.

Franco graduated in Audiovisual Communication and Humanities. She founded Epojé Films in 2003 together with Noé Rodríguez. Together they scripted and directed documentaries for television. In 2006 she worked towards an MA in Canada, which allowed her to further her knowledge of documentary theory and practice. Back in Vigo, she earned a PhD in Fine Arts with a thesis on cinema-museum. She has directed more than twenty documentaries and experimental pieces. In 2004, she co-directed, along with Noé Rodríguez, AADAT. This documentary won a prize at the videoart festival in Vitoria-Gasteiz and was selected in Germany’s European Short Film biennial festival and in Toronto’s Images Festival.

Noé Rodríguez began her professional career more than 15 years ago. She founded the production company, Epojé Films, with Xisela Franco. She co-produced and co-directed AADAT, an ethnographic documentary that enjoyed a good reception at different international film festivals. She immediately received a scholarship from Caixa-Canada and she moved to Toronto to study cinema production at York University. Currently she lives in Toronto where she participates actively in the experimental cinema community.

Serén studied Communication Sciences in Salamanca, Milan and Barcelona. In Barcelona, he studied for an MA in the theory behind and practice of creative documentary. Before beginning his life as a filmmaker, he worked as a cinema critic for Radio Galega, Cahiers du Cinéma España and Cineuropa. In 2012 he emigrated to Sweden where he filmed his documentary Pettring. This piece was premiered at the Festival Europeo in Sevilla in 2013 and it has been recognised by numerous international film festivals. He is currently working on his second full-length film.

THE GFF came about as an initiative spontaneously at the beginning of the year when a group of Galicians living in London decided to share their interest in Galician culture. The objective of the GFF is to create a space for the diffusion of Galician cinema in the British capital.

The first screening of Galician cinema in London organised by the GFF took place on 20th March at King’s College. The programme included ‘Encallados’, a full-length film directed by Alfonso Zarauza, and two short films: ‘1977’, an animation directed by Peque Varela, and Álvaro Gago’s ‘Curricán’.

The Galician Film Forum aims to fulfil three different functions. Firstly, it will serve as an exhibition platform. Secondly, it will be a place to observe the new audiovisual, creative diaspora in the UK. Thirdly, it will function as a space for reflecting on cinema and Galician culture more generally.