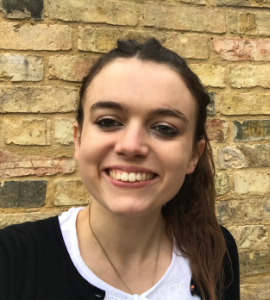 Harriet graduated from the University of Cambridge in 2013 with a degree in Modern and Medieval Languages. It was in her third year that she had the opportunity to go to Galicia for the first time. As an Erasmus student at the University of Santiago de Compostela, she fell in love with the Galician language, its culture and its literature. Thanks to the Galician courses organised by the RAG, the ILG and the USC, she started to learn the language and use it in her work. She did an MA in medieval studies at the same university and she’s now writing her thesis on medieval Galician-Portuguese love poems at King’s College London. Recently, she was awarded a short fellowship to spend time with the Temporal Communities research group at Freie Universität Berlin.

She discovered the Galician Film Forum thanks to an article in a Galician newspaper that came out after the first GFF event and she loves that she’s now part of the team and helping to promote Galician culture where she grew up.

Outside of the GFF, she loves peas, walking and sending postcards!