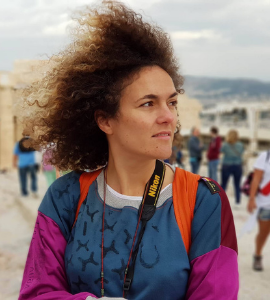 Adriana is a filmmaker from Vigo whose time with the GFF began during an informal meeting one day at the pub. At the time she didn’t know what those first pints together would lead to but she’s now spent five years working on organising and programming film screenings with the GFF and is one of the few founding members who are still active. She has also over five years of experience in independent and corporate video production and in teaching film courses to young children. She’s currently researching documentary and gender for her PhD at Royal Holloway University in London.