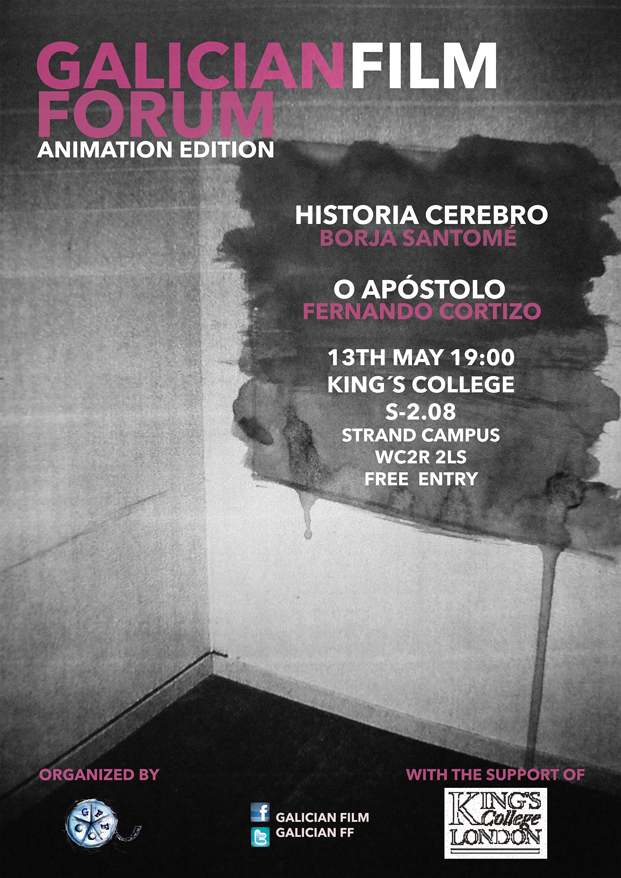 London, 9th May 2016. Animated films are the focus of the latest edition of the Galician Film Forum (GFF). The event will take place on Friday 13th May at King’s College London [7 pm, Strand Room S -2.08, London, WC2R 2LS]. The title for this event is Animation Edition and the GFF will be screening the feature-length film O Apóstolo, directed by Fernando Cortizo who will join the event via Skype, and the short film Historia cerebro, directed by Borja Santomé who lives in London at the moment and will take part in a Q and A after the event.

As with previous editions, the films will be screened in Galician and will have English subtitles. The event itself will take place in both languages. Entrance is free, but tickets should be reserved in advance on Eventbrite. Information about the event can be found on Facebook.

O Apóstolo is the result of five years of hard work by Artefacto Producciones whose ambitious project turned into the first stop motion animated film in Europe using stereoscopic production. Over two hundred professionals from the world of animation and 3D modelling helped to make this project a reality. The film uses an original shooting system whereby the protagonists do not just lend their voices to the film, but also act out the scenes prior to doing so and, in this way, inspire the animators to create certain movements and expressions for the characters they voice.

This film has won several prizes including the Audience Award at ANNECY 2013, the top prize at the Expotoons Festival in Buenos Aires and the Grand Prix at the Cinehorizontes Festival in Marseilles. Further recognitions include the Jury’s Special Award at Fantasporto and the Best Soundtrack Award and Audience Award at the Mostra de Lisboa.

Historia cerebro is by Borja Santomé, born in Vigo, and is a homemade 2D animation using watercolours that was awarded the 2nd Novos Valores Prize by the Diputación de Pontevedra in 2015. Using dirty, dark drawing, almost expressionist in style, the anonymous characters in Historia cerebro create an atmosphere marked by chaos and violence, an atmosphere where the protagonists’ emotions can really be felt.

Santomé is currently continuing to study arts-related subjects here in London and he is combining his cinematic work with drawing and painting. His second short film, ‘Rueda cabeza’, is also animated and has just been selected to compete in the Festival de Cans this year.

The GFF was born in 2015 when a group of Galician emigrants living in London joined together to create a space where Galician cinema could be promoted in London. It functions as an exhibition platform, a space for experiencing the new audiovisual creative diaspora in the United Kingdom and also as a space for reflecting on Galician cinema and culture.